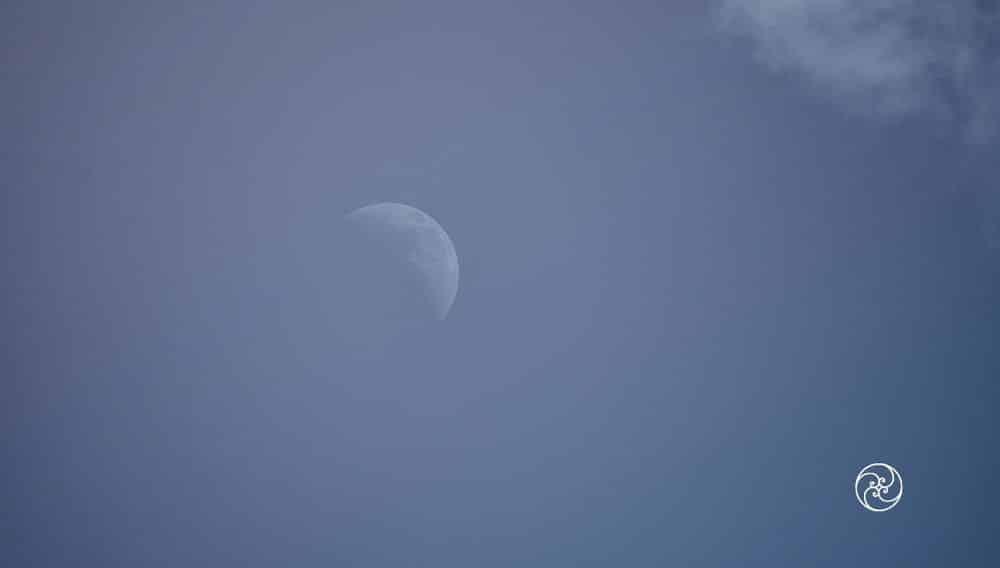 If you are wondering, “What is non-duality?” Here are teachings to deepen your non-dual understanding.

YOU. You are the focus of this path.

This is an invitation to know what “I” really means. To know thyself.

The common term for knowing the self is enlightenment.

Maybe you’re on this seeking path because you have an intuitive feeling there’s more to life than what meets the eye.

Perhaps like many of us, you have not been happy to accept the noisy marketplace of spiritual beliefs blindly.

If you’re seeking answers to questions burning in your heart and you sincerely want to know rather than hope or believe, then understanding non-duality can be the gift of all lifetimes.

Studying non-duality is also the study of self-realization and spiritual enlightenment.

The main focus is simple and remains the same at the start, throughout this journey and at more mature stages of understanding.

If we were to put this whole path into one question, as one focus, it would be to know—”Who am I?” 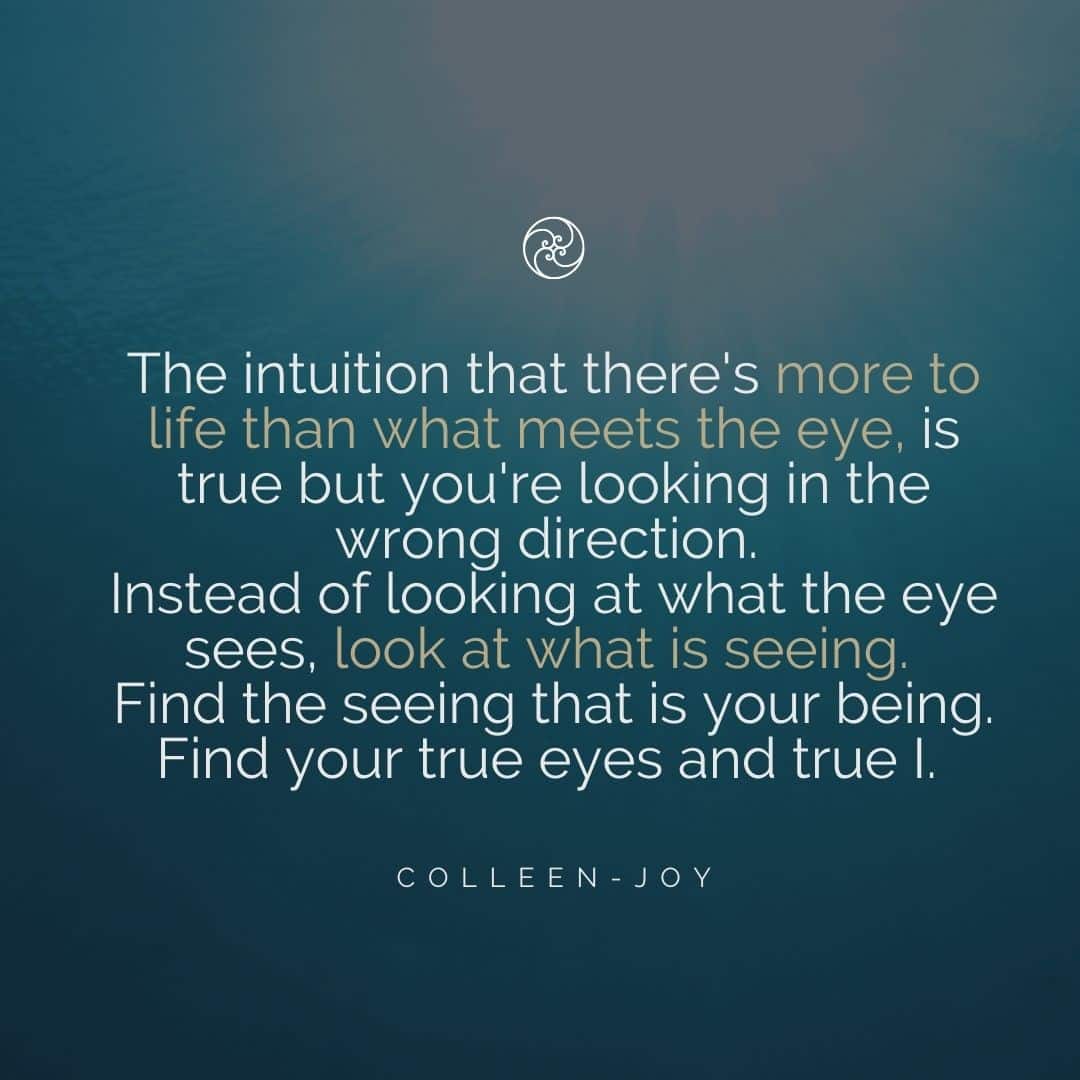 What is non-duality? Non-duality starts and ends with understanding the answer to: “Who am I?”

The sage Ramana Maharshi, highly regarded in the non-dual community, was known for two teaching styles.

The first was silent teaching, where his presence alone embodied the truth of what he had discovered. And the second was his favourite line of questioning.

When a visitor would ask him a question—regardless of the topic—he would often offer a question in return.

He asked in various forms, “To whom do those thoughts arise?”

He was pointing the questioner back to what was before—prior to the question itself. To pure awareness—the true I am.

So whether you’re a beginner or an advanced non-duality student, the question remains the same, “Who am I?”

To find the answer to ‘what is non-duality?’ look at who is witnessing the question.

This is the study of the self. It is an invitation to discover what the word “I” truly refers to. 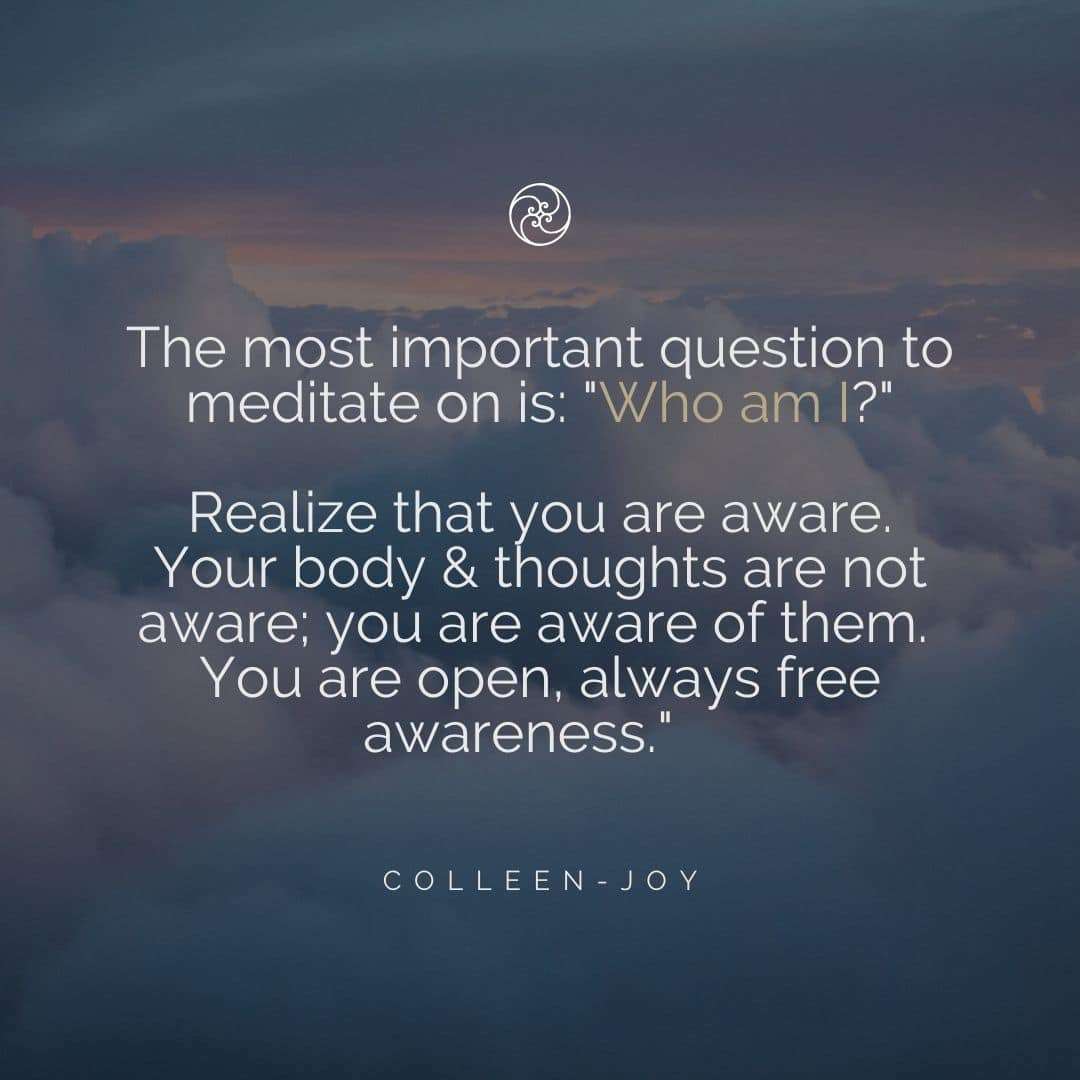 We use the word “I” from the youngest age; we assume we all agree about what it means.

We point to the body and say “I”—claiming the body’s experiences as “I”.

We identify with the physical body.

We take the body as the location for our existence.

All thoughts and feelings like the weather in and around the body are also claimed as the self. Memories of life experiences are the story of this “I”.

Until non-dual understanding, we intuitively long for something. Some call their seeking longing for answers; others want to find themselves; some seek God.

We may hope that the treasures of freedom, happiness and peace will be found at the end of our quest.

Our intuition is accurate about what we will find, but our seeking mind points us in the wrong direction.

The enlightened mind is a mind that rests; it rests because it has come home to the ocean of the true self. We are looking for what we are looking from.

Like a river that finds the ocean, the seeking mind rests in its home, the non-dual true self.

The true self is the treasure of love, happiness, peace and freedom.
You are already everything you are seeking. 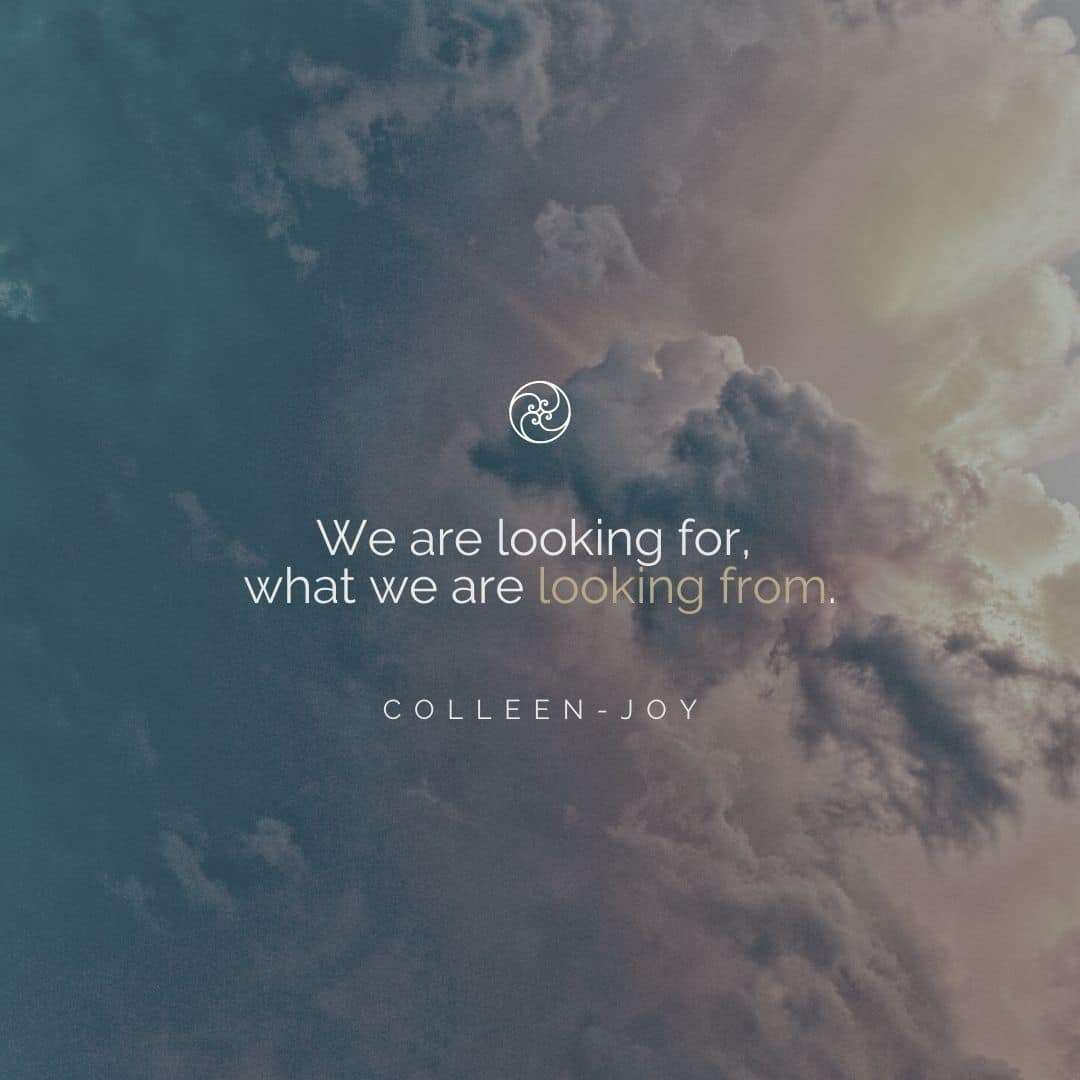 So let’s mindfully consider “Who am I?”

The major world religions each have a traditional counterpart where followers practice an inward path to know and experience their spirituality directly.

Advaita Vedanta is a teaching for understanding ‘what is non-duality’ and to guide the non-dual self-realization path.

The word ‘Advaita’ means not two in Sanskrit. It is the Sanskrit word for non-duality.

In many traditions, specifically in Advaita Vedanta, enlightenment is a process of negation. We remove everything we are not to reveal what we are.

The metaphor often used for this is removing the cloud covering the sun.

You are aware of being aware.
No thinking is needed to know that you know you exist.

The cloud represents ignorance—simple ignorance of our true nature. By removing ignorance, we reveal the self.

Vedanta teaches that we need self-knowledge to remove self-ignorance.

The Sanskrit phrase for this process is “neti neti” which means “not this, not this”, or “neither this nor that.”

Each neti-neti step is a realization—a falling away of old beliefs replaced by discovering what is already there. And these beliefs are all centred around false identification—false identities.

The direct path non-dual teacher Adyashanti says that this process is like waking up in a set of Russian dolls.

Each waking gives us more space, more freedom from the limitations of the previous identity—until we are free from all identities.

There is usually a steady progression of realizing what we are, then seeing what is left, what we always are.

The process of this negation is also called Subject Object discernment. It can be a valuable and important step.

Meet me on a bridge of understanding.

Let’s agree on the meaning of some words.

When learning from a teacher, it’s important that we first learn what the teacher means when they use specific words.

Letting go of our prior experience and education to be open to meeting our spiritual teachers on the bridges of their understanding. Not having blind faith but seeking understanding.

If you ask, “What is non-duality?” the single word that needs mindful investigation is the simple word “I”.

When a non-dual sage uses the word “I”, they are not referring to the common use of the word “I”.

This is why so many misunderstand enlightened teachers. Enlightenment is the revision of our deeper understanding of the word “I”.

It can be helpful to admit that our understanding of the word” I” maybe lack deep understanding. And to be willing to be uncomfortable, even suffer as we find the truth.

Vedanta teachings state that the Seeker needs a burning desire or hunger for the truth.

Nisargadatta, a non-dual sage from India taught that earnestness was required.

When you see for yourself that the word “I” means non-dual, open present ordinary awareness, then you have met non-dual teachers on the bridge of understanding. It’s not enough to understand this intellectually—this truth asks to be embodied and lived. 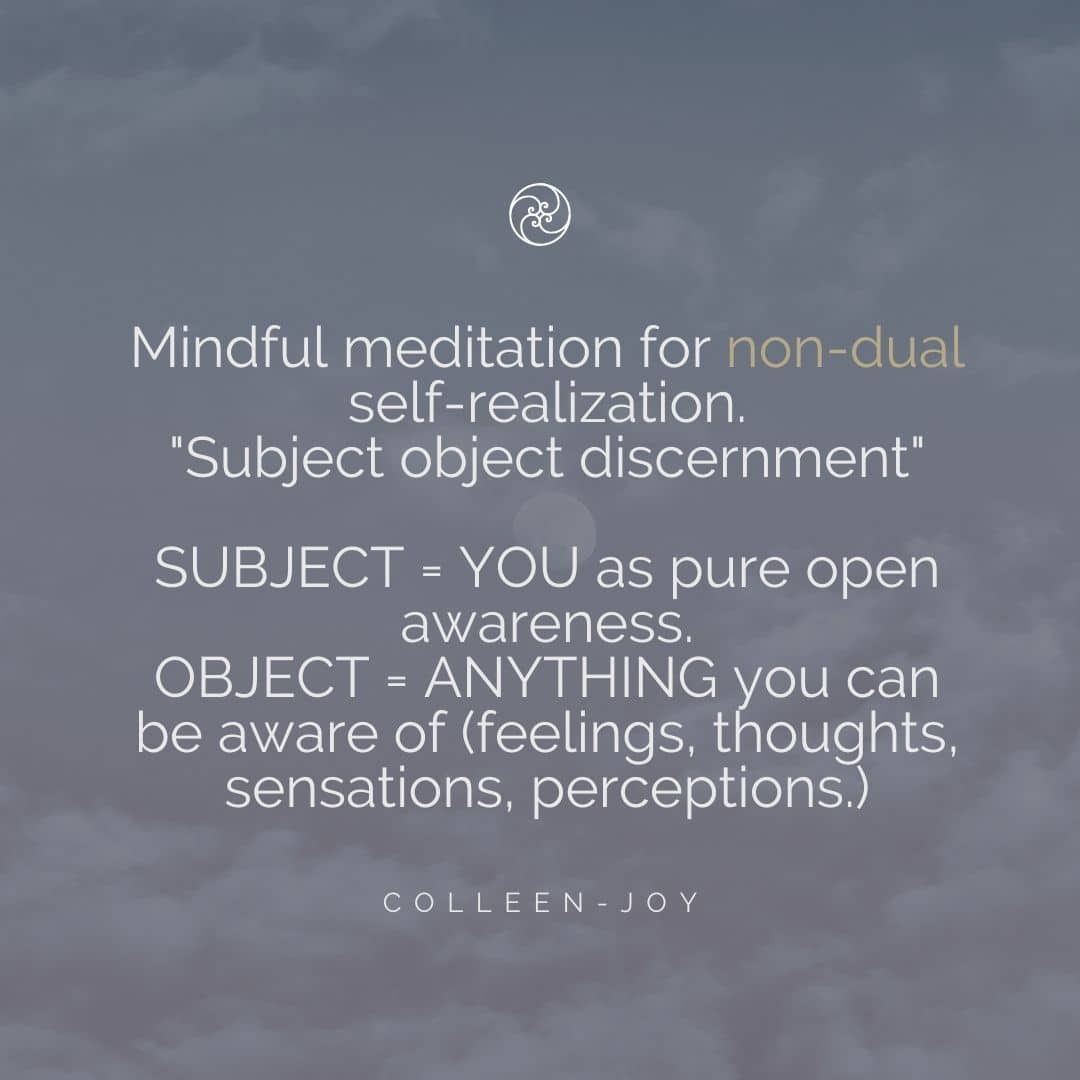 Non-dual teachings often emphasize the importance of “Subject-Object Discernment” as a mindfulness practice.

First, let’s understand what is meant by subject and object. Let’s meet on the bridge of understanding to make sure we are clear.

Subject means you. You as pure awareness.
Object means anything you can be aware of.

To practice Subject-Object discernment, first be clear on the definitions above. Then start applying this discernment in your daily life.

It is important to apply this discernment practically, as a mindfulness exercise, meditation or gentle, curious observation.

Ask, is this the subject or an object?”

Which is another way of saying, “Is this myself as awareness, or is it an object in awareness?”

You are not an object.

Why is knowing the self as the subject, as awareness so tricky?

Because we believe that the self is an object, we look for ourselves as an object.

But an eyeball can’t turn around to see itself. However, you can know yourself, but only as you are – as awareness.

The direct path, non-dual teacher Rupert Spira, uses the metaphor of a screen. The movie, with its pixel, formed characters, colours, shapes, sounds and movements, are the objects.

The invisible screen represents the subject, the self, pure awareness.

He often says to think of the screen as being a self-aware screen.

As awareness—we are self-aware.

Rupert also teaches that virtually, when asked, “Are you aware?” almost anyone would check and answer “Yes!”

We don’t need thoughts or objects to know that we exist and are aware. In this way, Rupert highlights the non-dual teaching that the self is self-evident.

The mistake is thinking that the self is an object. A separate self. This is the root of suffering.

You are aware of thoughts, thoughts are not aware of you. 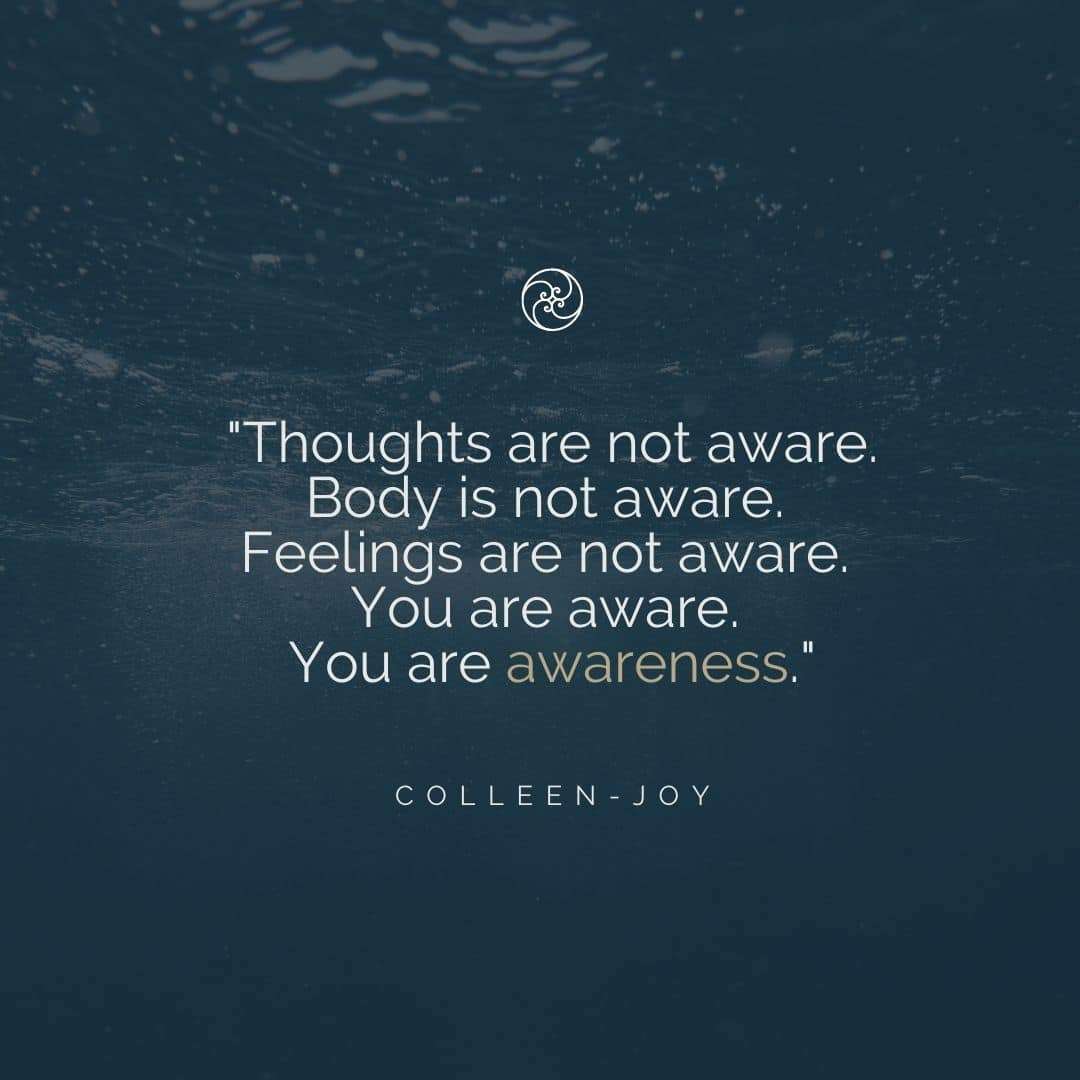 Self-enquiry is a term used in non dual teachings to contemplate the existence and nature of consciousness. This is an essential practice and foundation teaching when seeking non-duality for beginners.

In other words to contemplate the question “who am I?” I recommend that you not work with this as a mechanical disciplined thinking exercise—but rather with heartfelt hunger and interest.

Along with Subject Object discernment, another lens of perception that can be helpful is to discern what is real from what is unreal. So I have a new definition to introduce to you.

In non dual teachings, the word “real” or “reality” has its own set of meanings.

The word “reality” or “real” is ascribed to what is unchanging—what never changes.

What is unreal, or not real in the context of ultimate reality, is that which changes.

So think about, what changes? What undergoes transformation, growth and decay? If you take a moment to ponder this you might say ‘everything changes’.  Thoughts, personalities, the human body, planets—all objects are subject to change.

Tibetan monks honor this truth by creating beautiful intricate sand mandalas on the floors of their temples.

Then you might ask, “So what is real? What is left?

Awareness is left. But most have spent very little time investigating the subject, awareness, so they don’t have much understanding of themselves—as pure open awareness.

I’ve heard Rupert Spira use an example that I also use in my teaching. So often you hear older people say, “ I don’t feel old.” Intuitively they are aware that they’re not old.

When our bodies were younger and our minds were younger, was there not a sense of being aware? And was that awareness not exactly the same as it is today? Indeed.

You are unchanging—You are real. 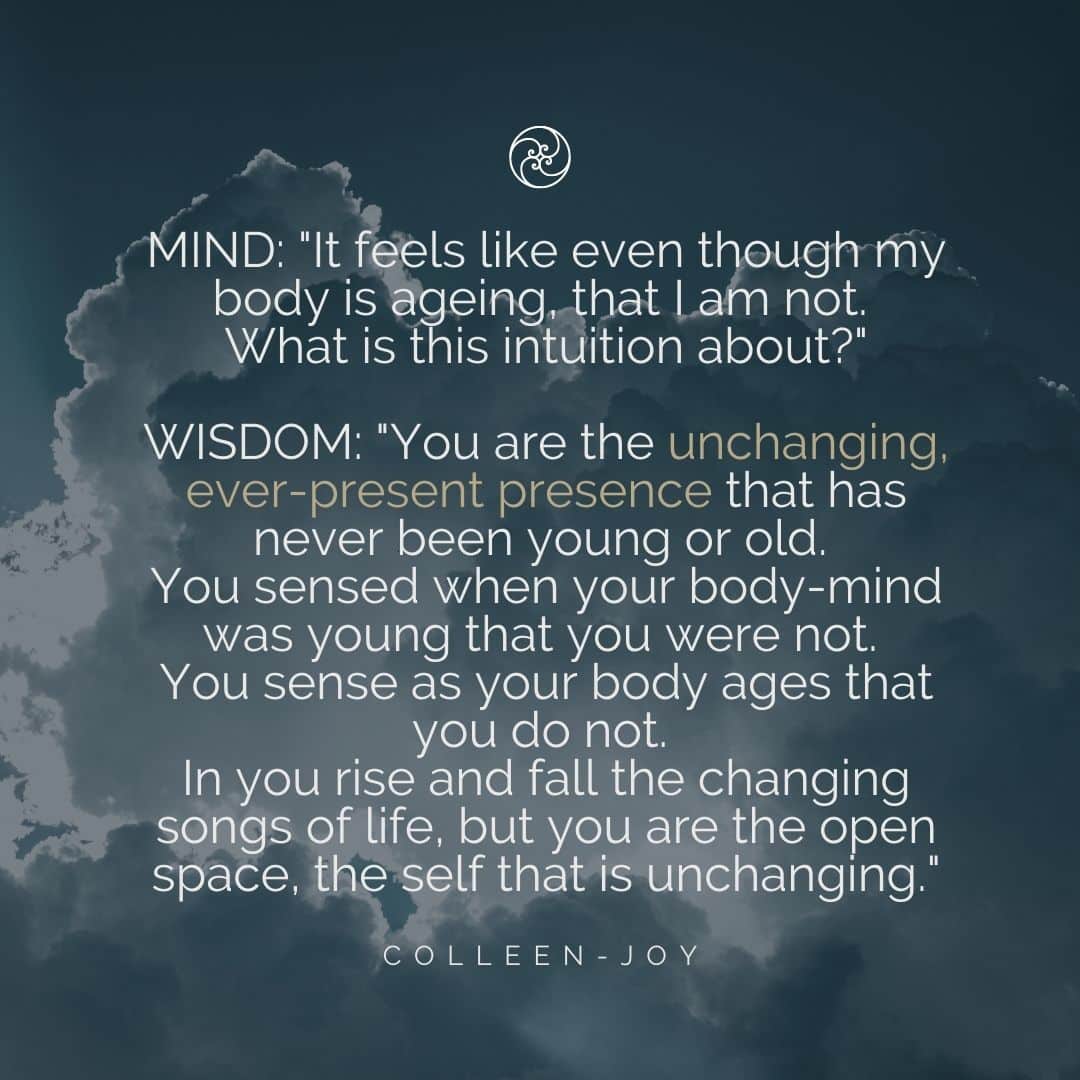 Closing Message on “What is non-duality?”

There’s more to teach than these few introductions can do justice, but this page should give you some idea of the path, especially when asking, “What is non-duality?”

After separating the subject as awareness from objects which are the contents of awareness, there is a new call to take back the objects and collapse this distinction. This collapse of perception is a natural part of the process after we realize the self as non-dual.

Once established in oneself as pure awareness, as the subject, we are called to rediscover the objects of awareness.

I agree with Rupert Spira that to remain in this understanding of being the subject, apart from objects, can leave one aloof. There is a coolness to this perceptual position. This is another subtle form of duality when we claim our position as a subject divided against objects.

The mind has now built a new apparent wall to divide the self again. This new wall of division can make us feel at odds with life, disconnected, sometimes even adrift.

When I’ve asked in a wisdom well meditation about new duality, I saw that what is missing is love.

Reclaiming, rediscovering and collapsing the Subject-Object divide takes courage. The embodiment of truth takes courage. For our courage, we rediscover objects as an expression of holy love.

I join the non-dual choir to add my song of love to the truth, from the self to the self.

I want to learn about…

“Love is what life is made of, when enlightened, love can move freely in service to itself.”